But on what basis, besides, that is, hysteria and fanciful extrapolations of sparse or unreliable data?

And, doom porners, you can’t have it both ways. Either not that many people, besides those tested, have the virus or the 335,000 figure represents the tip of the iceberg for infections…in which case the ‘WE ARE ALL GOING TO DIE’ thing doesn’t stack up..i.e…where are all the deaths?

Let’s get some perspective, let’s look at Italy..

At time of writing, Italy has about 60,000 confirmed cases of coronavirus.

In the flu season 2015/2016, Italy reported 20,259 deaths attributable to influenza (just as now, these were almost all in the 65+ age group). (Source: Journal of Infectious Diseases)

Nobody proposed a lock down of the nation in 2016.

A Fiasco in the Making? As the Coronavirus Pandemic Takes Hold, We Are Making Decisions Without Reliable Data

At a time when everyone needs better information, from disease modelers and governments to people quarantined or just social distancing, we lack reliable evidence on how many people have been infected with SARS-CoV-2 or who continue to become infected. Better information is needed to guide decisions and actions of monumental significance and to monitor their impact.

Draconian countermeasures have been adopted in many countries. If the pandemic dissipates — either on its own or because of these measures — short-term extreme social distancing and lockdowns may be bearable. How long, though, should measures like these be continued if the pandemic churns across the globe unabated? How can policymakers tell if they are doing more good than harm?

Vaccines or affordable treatments take many months (or even years) to develop and test properly. Given such timelines, the consequences of long-term lockdowns are entirely unknown.

The data collected so far on how many people are infected and how the epidemic is evolving are utterly unreliable. Given the limited testing to date, some deaths and probably the vast majority of infections due to SARS-CoV-2 are being missed. We don’t know if we are failing to capture infections by a factor of three or 300. Three months after the outbreak emerged, most countries, including the U.S., lack the ability to test a large number of people and no countries have reliable data on the prevalence of the virus in a representative random sample of the general population.

This evidence fiasco creates tremendous uncertainty about the risk of dying from Covid-19. Reported case fatality rates, like the official 3.4% rate from the World Health Organization, cause horror — and are meaningless. Patients who have been tested for SARS-CoV-2 are disproportionately those with severe symptoms and bad outcomes. As most health systems have limited testing capacity, selection bias may even worsen in the near future.

The one situation where an entire, closed population was tested was the Diamond Princess cruise ship and its quarantine passengers. The case fatality rate there was 1.0%, but this was a largely elderly population, in which the death rate from Covid-19 is much higher.

Image on the right: Cases from Diamond Princess (Source: WHO) 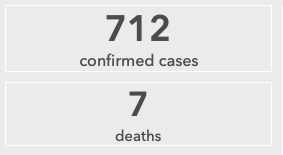 Projecting the Diamond Princess mortality rate onto the age structure of the U.S. population, the death rate among people infected with Covid-19 would be 0.125%. But since this estimate is based on extremely thin data — there were just seven deaths among the 700 infected passengers and crew — the real death rate could stretch from five times lower (0.025%) to five times higher (0.625%). It is also possible that some of the passengers who were infected might die later, and that tourists may have different frequencies of chronic diseases — a risk factor for worse outcomes with SARS-CoV-2 infection — than the general population. Adding these extra sources of uncertainty, reasonable estimates for the case fatality ratio in the general U.S. population vary from 0.05% to 1%.

That huge range markedly affects how severe the pandemic is and what should be done. A population-wide case fatality rate of 0.05% is lower than seasonal influenza. If that is the true rate, locking down the world with potentially tremendous social and financial consequences may be totally irrational. It’s like an elephant being attacked by a house cat. Frustrated and trying to avoid the cat, the elephant accidentally jumps off a cliff and dies.

Could the Covid-19 case fatality rate be that low? No, some say, pointing to the high rate in elderly people. However, even some so-called mild or common-cold-type coronaviruses that have been known for decades can have case fatality rates as high as 8% when they infect elderly people in nursing homes. In fact, such “mild” coronaviruses infect tens of millions of people every year, and account for 3% to 11% of those hospitalized in the U.S. with lower respiratory infections each winter.

These “mild” coronaviruses may be implicated in several thousands of deaths every year worldwide, though the vast majority of them are not documented with precise testing. Instead, they are lost as noise among 60 million deaths from various causes every year.

Note the uncertainty about influenza-like illness deaths: a 2.5-fold range, corresponding to tens of thousands of deaths. Every year, some of these deaths are due to influenza and some to other viruses, like common-cold coronaviruses.

In an autopsy series that tested for respiratory viruses in specimens from 57 elderly persons who died during the 2016 to 2017 influenza season, influenza viruses were detected in 18% of the specimens, while any kind of respiratory virus was found in 47%. In some people who die from viral respiratory pathogens, more than one virus is found upon autopsy and bacteria are often superimposed. A positive test for coronavirus does not mean necessarily that this virus is always primarily responsible for a patient’s demise.

If we assume that case fatality rate among individuals infected by SARS-CoV-2 is 0.3% in the general population — a mid-range guess from my Diamond Princess analysis — and that 1% of the U.S. population gets infected (about 3.3 million people), this would translate to about 10,000 deaths. This sounds like a huge number, but it is buried within the noise of the estimate of deaths from “influenza-like illness.” If we had not known about a new virus out there, and had not checked individuals with PCR tests, the number of total deaths due to “influenza-like illness” would not seem unusual this year. At most, we might have casually noted that flu this season seems to be a bit worse than average. The media coverage would have been less than for an NBA game between the two most indifferent teams.

The most valuable piece of information for answering those questions would be to know the current prevalence of the infection in a random sample of a population and to repeat this exercise at regular time intervals to estimate the incidence of new infections. Sadly, that’s information we don’t have.

In the absence of data, prepare-for-the-worst reasoning leads to extreme measures of social distancing and lockdowns. Unfortunately, we do not know if these measures work. School closures, for example, may reduce transmission rates. But they may also backfire if children socialize anyhow, if school closure leads children to spend more time with susceptible elderly family members, if children at home disrupt their parents ability to work, and more. School closures may also diminish the chances of developing herd immunity in an age group that is spared serious disease.

This has been the perspective behind the different stance of the United Kingdom keeping schools open, at least until as I write this. In the absence of data on the real course of the epidemic, we don’t know whether this perspective was brilliant or catastrophic.

Yet if the health system does become overwhelmed, the majority of the extra deaths may not be due to coronavirus but to other common diseases and conditions such as heart attacks, strokes, trauma, bleeding, and the like that are not adequately treated. If the level of the epidemic does overwhelm the health system and extreme measures have only modest effectiveness, then flattening the curve may make things worse: Instead of being overwhelmed during a short, acute phase, the health system will remain overwhelmed for a more protracted period. That’s another reason we need data about the exact level of the epidemic activity.

One of the bottom lines is that we don’t know how long social distancing measures and lockdowns can be maintained without major consequences to the economy, society, and mental health. Unpredictable evolutions may ensue, including financial crisis, unrest, civil strife, war, and a meltdown of the social fabric. At a minimum, we need unbiased prevalence and incidence data for the evolving infectious load to guide decision-making.

In the most pessimistic scenario, which I do not espouse, if the new coronavirus infects 60% of the global population and 1% of the infected people die, that will translate into more than 40 million deaths globally, matching the 1918 influenza pandemic.

The vast majority of this hecatomb would be people with limited life expectancies. That’s in contrast to 1918, when many young people died.

One can only hope that, much like in 1918, life will continue. Conversely, with lockdowns of months, if not years, life largely stops, short-term and long-term consequences are entirely unknown, and billions, not just millions, of lives may be eventually at stake.

If we decide to jump off the cliff, we need some data to inform us about the rationale of such an action and the chances of landing somewhere safe.

“Dear The Politician…Congratulations on your recent death and thank you for your interest in joining God and his Angelic Cohort in Heaven. Regretfully, I have to inform that on this occasion your application has not been successful. However, alternative accommodation has been found for you in Hell. We very much hope you enjoy your stay.

Once upon a time… there was a wicked politician (is there any other sort?) who, unlike most of his kind, did NOT escape justice for his crimes…

In this Tale from Anywhere, an evil politician is executed for war crimes and finds himself in Hell. This seemingly normal event causes chaos to break out in Heaven as a furious Devil demands a meeting with God. He wants The Politician out of his infernal domain because The Politician is not suffering the Torments of Hell but enjoying every blood-splattered moment of them! God agrees to the meeting…

…but what on Earth (and Heaven) do you do with someone who is too wicked for Hell?

Oh, and were God and the Devil really once friends and partners?

Editorial praise for Tales from Anywhere
“Brilliant comic technique, and a glorious sense of moral outrage at the current mess in which our country seems mired, combine here to make a unique reading experience. Often laugh-out-loud funny, the real-life characters behind these innocuous fairy tales and fables hit you by surprise, a series of sharp rocks hidden in those snowballs. Amazingly, with all the faux-naievete and children’s book elements gleefully displayed here, the writing never becomes twee or condescending. I don’t know where this writer’s been all his life, but I intend to catch up with him, and keep an eye on where he’s headed next!… Bravo, Mr. Hennerly!”  – VINE VOICE
“This is the most spiritually and intellectually worthwhile and inspiring read I have encountered in a very long time ever since my days as a theological studies student. To me it is a humanist masterpiece on par with my favorite classists such as Faulkner, Lawrence and Bellow. It subverts conventional morals and doctrines while anchoring the plot development and the characters upon what I would call authentic virtues, Intuitive Knowledge and Intuitive Truth. Hennerley speaks Truth in this world of lies that shackle us from birth and asphyxiate us into death, all the while conspiring against our very vitality of the spirit. I cannot wait to read more similar stories from Hennerley! Thank you Hennerley for shining a beacon of light amidst such darkness we live under.”  – US REVIEWS

View all posts by random2409

This site uses Akismet to reduce spam. Learn how your comment data is processed.